Bring a Torch, Jeanette Isabella is a translation of a 17th century Christmas carol, Un flambeau, Jeannette, Isabelle from the Provence region of France. To this day, French children in Provence dress up as shepherds and milkmaids (the subjects of the carol) and sing this as they go to midnight mass on Christmas. 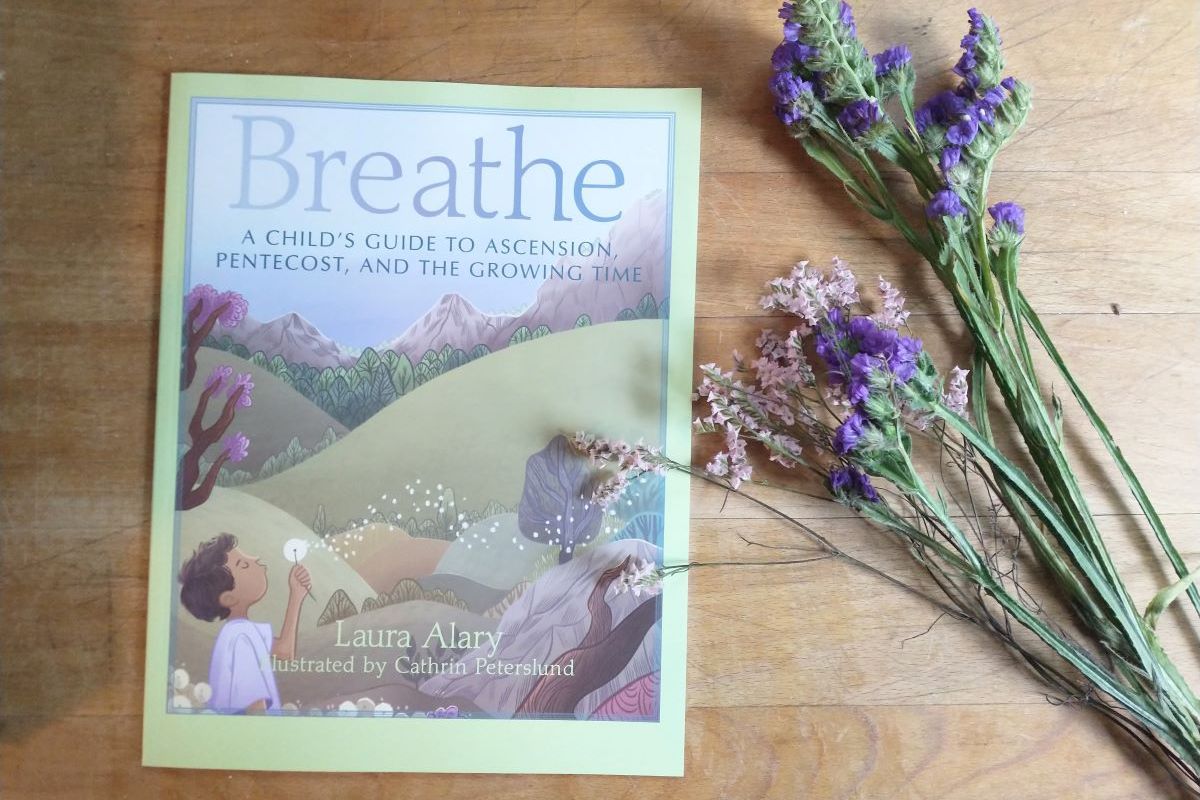 Happy Rogation Sunday and Mother’s Day! While each of those occasions deserve their own posts, instead I’m squeezing in a review about a book for Ascension and Pentecost (because this is the first opportunity I’ve been able to post it and so that you can have enough time to buy it for yourself, if you are so inclined). I’ve written here on the Homely Hours about how much I have appreciated Laura Alary’s “Child Guides” to both Lent and Advent. So, I was delighted to receive a copy of her new book Breathe: A Child’s Guide to Ascension, Pentecost, and the Growing Time from Paraclete Press. Just like her other books, Breathe is an example of poetic theologizing for children — weaving together the Scriptures and church year traditions as she explores the liturgical themes. As you would expect from the title, Alary chooses the theme of breathing in order to illuminate a biblical theology of the Holy Spirit as wind and breath. The book is divided into four sections: 1) “Breathless” (Christ leaving... 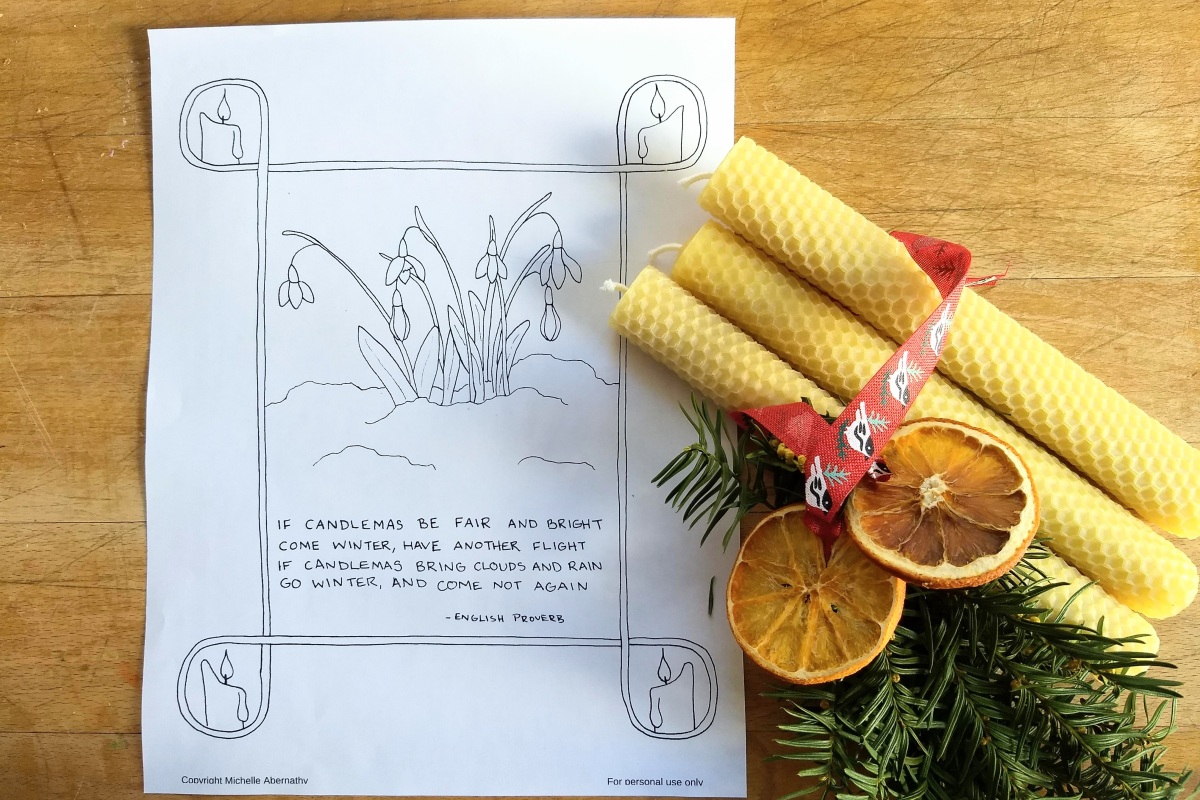 Happy Candlemas! Today, we’re sharing a charming new coloring page from Michelle Abernathy Art (and consequently updating this site for the first time since May!). Download the Candlemas proverb coloring page here. What are your plans for today? Besides this coloring page, in my home, we’ll be praying this Candlemas Family Liturgy for evening prayer. I’m planning a candlelit breakfast-for-dinner with the traditional crepes. And, last night, I filled some birthday balloons with water so that we can put out ice luminaries this evening in our front yard. We’ll see how that works out. Here is a link to last year’s quick Candlemas post (which includes links to all of our resources for this feastday.) “Today as we bear in our hands lighted candles, how can we not fail to remember that venerable old man Simeon who on this day held the child Jesus in his arms — the Word who was latent in a body, as light is latent in a wax candle — and declared him to be ‘the light to enlighten... 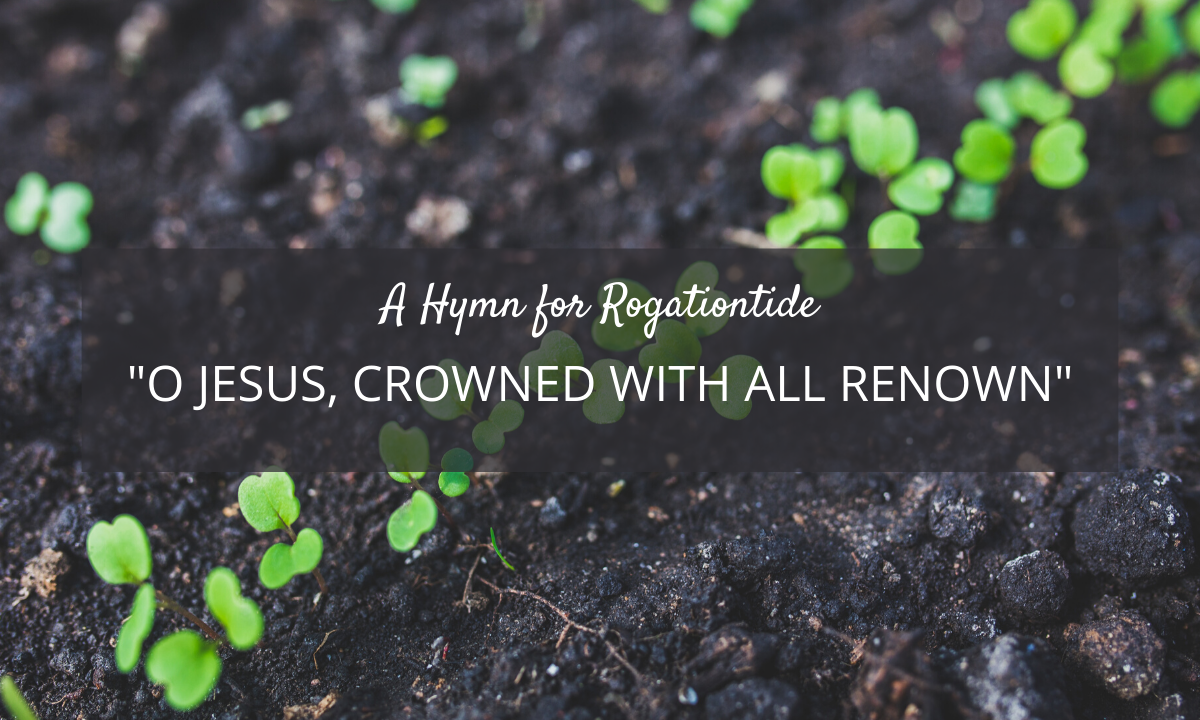 Due to the Zoom outage on Sunday morning, we didn’t sing “O Jesus, Crowned With All Renown” for our church’s virtual service. This made me sad because I love the words to this hymn — and, of course, Kingsfold (the tune). So, I thought I would share a simple home recording of the hymn as an encouragement for us all to be singing it in our living rooms (and gardens!). Normally, for our church, I would be playing the piano; but the ukulele is nice for homely music-making. It’s #148 in The Book of Common Praise 2017 and #101 in The Hymnal 1940 (and I can’t find my 1982 or I would share). Here are the chords we used. O Jesus, crowned with all renown, Since Thou the earth hast trod, Thou reignest, and by Thee come down Henceforth the gifts of God. Thine is the health and Thine the wealth That in our halls abound, And Thine the beauty and the joy With which the years are crowned. Lord, in their change, let frost and heat, And... 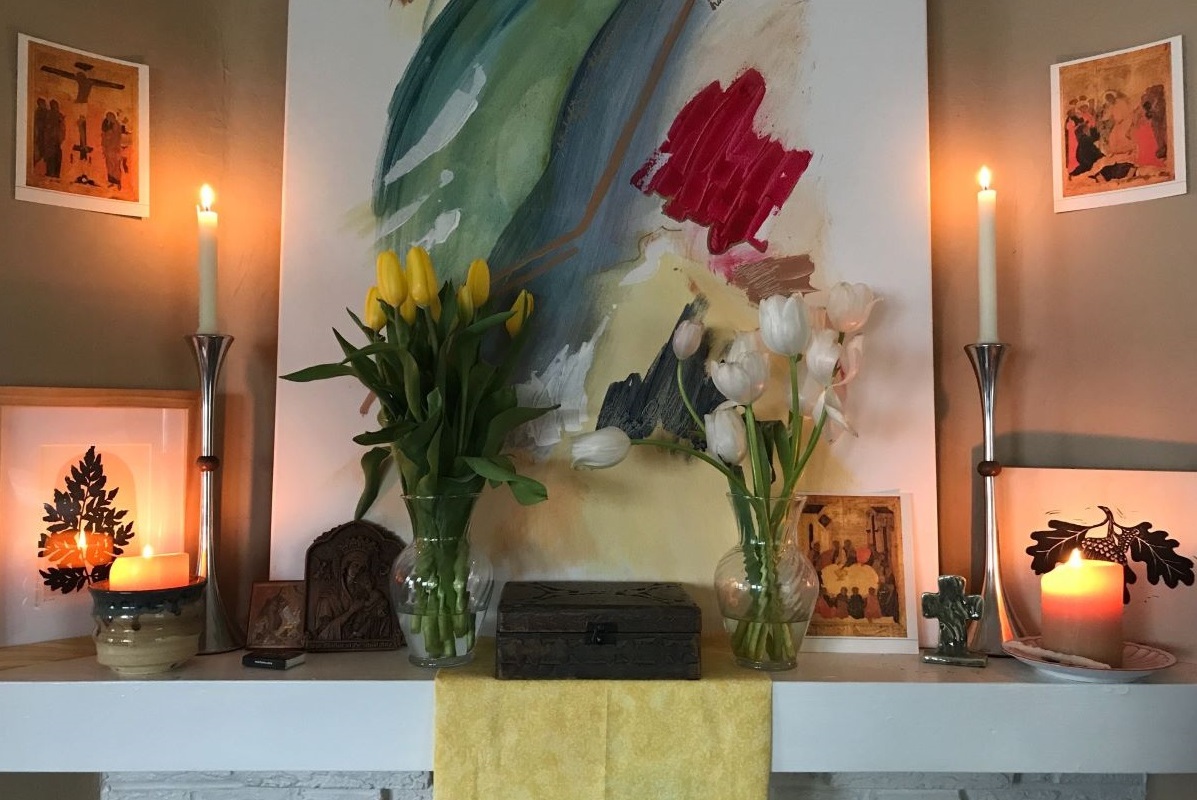 Thanks to Layne Hilyer for this contribution to our previously paused, but now perhaps ongoing Meaningful Homes Series. If you happen to be inspired by this series (now that we’re all staying at home a bit more), consider writing a guest post and emailing thehomelyhours@gmail.com. I have a confession: virtual church services have left me with a hard heart. The calcification began the first week of the stay-at-home order as my wife and I prepared for worship by propping up a cellphone facing the couch like a little television. On screen was the inside of our parish from an angle I had not seen—I would never sit so close to the front—and there was our priest whose voice I heard microphoned for the first time ever as the acoustics in the small sanctuary make audio equipment unnecessary. These changes among others made me so uncomfortable and frustrated that I considered just waiting for the stay-at-home order to pass before “going” to church again. It seems to me that what is so unsatisfying about church...

Here is my latest article for the North American Anglican. The Rogation Days will arrive as my small vegetable garden begins to look nice. I’ll be digging around in my raised beds, feeling like Wendell Berry may be modestly pleased with me and wondering if he knows about the Rogation Days (because I imagine he would approve). A few years back, since it was not obvious to me what the Rogation Days were about from the name, I started mentally subtitling them “The Wendell Berry Days.” Now Rogationtide is tangled up in my mind with quotes about the importance of agriculture and of preserving (seemingly) anachronistic traditions tied to the order of the world. What are the Rogation Days? Dating back to 470 AD, Archbishop Mamertus instituted the Rogation Days – the Monday, Tuesday, and Wednesday before Ascension Day – after a period of natural disasters had ravaged the people of Vienne, France. He proclaimed days of fasting and processions of prayer around the freshly-sprouted fields, asking God for mercy in the growth...

Here is my latest post for the North American Anglican. Have you read the Supper of the Lamb by Robert Farrar Capon? It’s been just the right book for me to be rereading lately…. Finding myself cooking more than ever and in need of some inspiration, I’ve lately returned to Robert Farrar Capon’s Supper of the Lamb: A Culinary Reflection. Written by an Episcopal priest back in 1967, The Supper of the Lamb is both a quirky cookbook and a doxological digression on the nature of reality. Since he describes himself as an “Anglican, or moderately high-church, cook,” readers of this publication may discover a guide to Anglican identity even unto the kitchen (7). Yet regardless of tradition, this book is full of practical and theological insights that are pertinent in these strange days. Now that we are trying to minimize grocery trips, I’ve been reminded of Capon’s distinction between “ferial” and “festal” cooking. While I’ve always seen his thoughts on “ferial” cooking as applicable for Lent, they’re even more practical now during the... 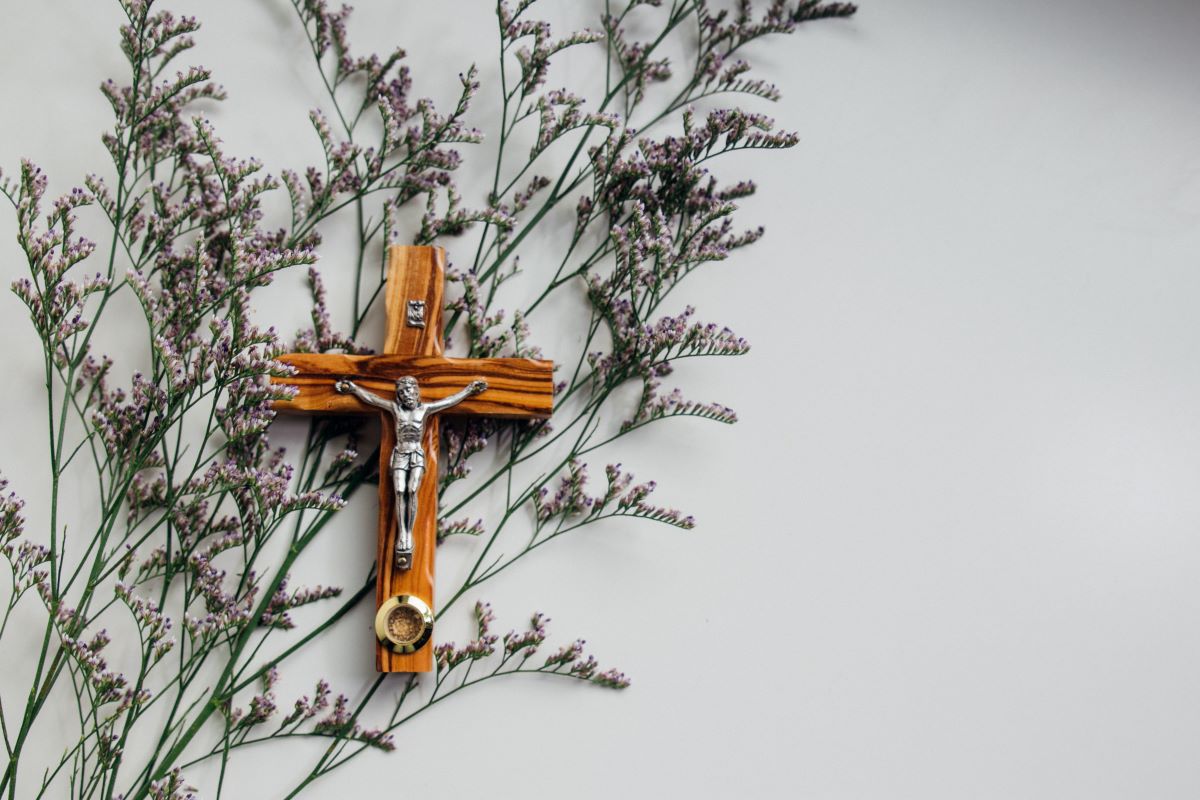 Thank you to Jay and Emelie Thomas for putting together this guide to Holy Week at Home. We are grateful to be able to share something tailored specifically for this year, in addition to the resources we already have. Jay and Emelie are young parents who are constantly learning how to “raise up their children in the way they should go” through the historic rhythms and practices of the Church. They both hold degrees in English Literature from the U.S. Naval Academy. Jay is a Postulant in the Special Jurisdiction of the Armed Forces and Chaplaincy (ACNA), and both Emelie and Jay are resident in the Anglican Diocese of Christ our Hope.  The COVID-19 Pandemic has brought with it an uncannily sheltered and isolated Lenten season. Many have commented that it is perhaps appropriate that we have endured this societal fast during a season of fasting. Although we do not intend to say the same, we will say that as we prepare for Holy Week, the Triduum, and Eastertide – as much as this... 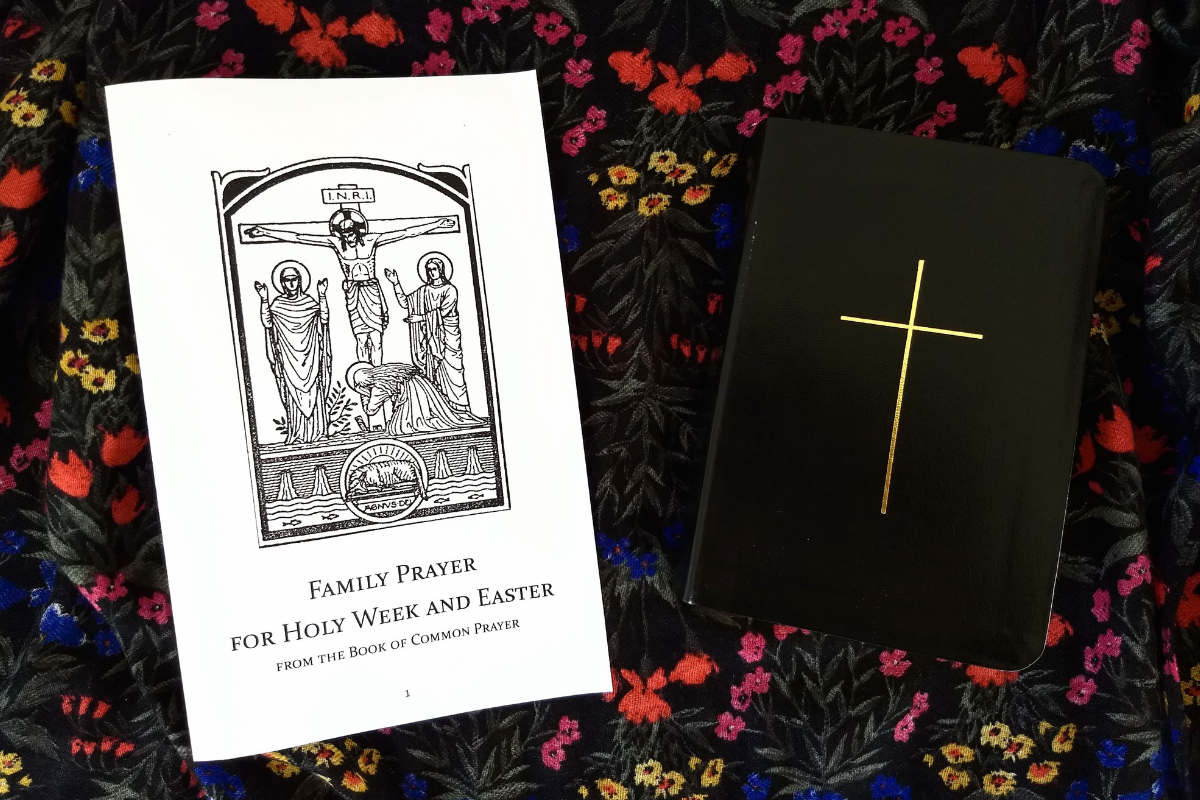 I can hardly believe that Palm Sunday is in a few days. This is going to be a very brief post sharing what we have available here on this site to help us celebrate Holy Week at home this year. Family Prayer for Holy Week and Easter Last year, I put together a this family prayer booklet  to help families go through the collects and events of Holy Week. It’s essentially family prayer from the 1928 Prayer Book. The suggested readings follow the events of each day of Holy Week. I’m also going to print out the images above. I formatted an image a day with the collect for the day and we will look at the painting during our family prayer time. I’ll then display it on our “little oratory” throughout the day. Here is the Holy Week Family Prayer Booklet (and here it is as a PDF with pages arranged as booklet) Here are the Holy Week images with collects. (Please email me at thehomelyhours@gmail.com if you would like any of these files in another... 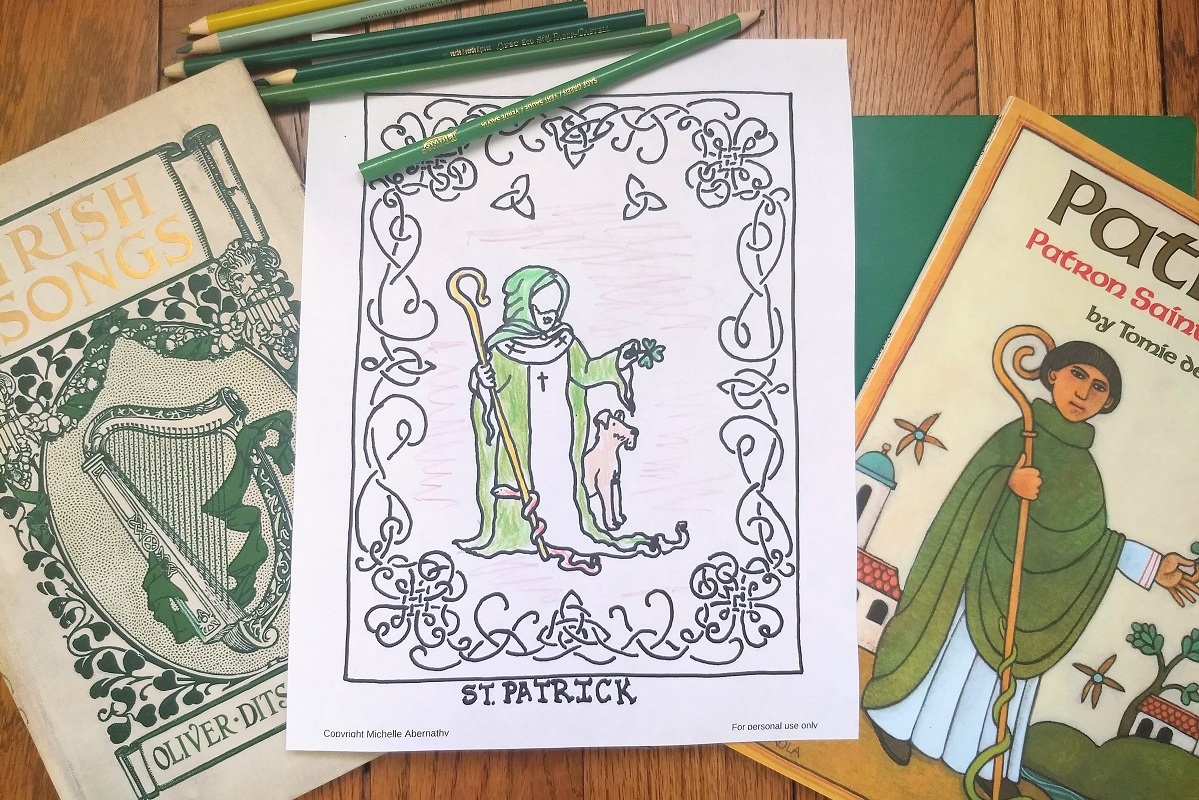 Happy Saint Patrick’s Day, friends! I’m making this quick post so that our Saint Patrick’s Day posts are easy to find on our homepage. Here is a free coloring page of Saint Patrick from Michelle Abernathy: Download the Saint Patrick coloring page here. In addition to Irish folk songs, make sure you sing the Breastplate of Saint Patrick today. 1 I bind unto myself today the strong name of the Trinity by invocation of the same, the Three in One and One in Three. 2 I bind this day to me forever, by power of faith, Christ’s incarnation, his baptism in the Jordan river, his death on cross for my salvation, his bursting from the spiced tomb, his riding up the heavenly way, his coming at the day of doom, I bind unto myself today. 3 I bind unto myself today the virtues of the starlit heaven, the glorious sun’s life-giving ray, the whiteness of the moon at even, the flashing of the lightning free, the whirling wind’s tempestuous shocks, the stable earth, the... 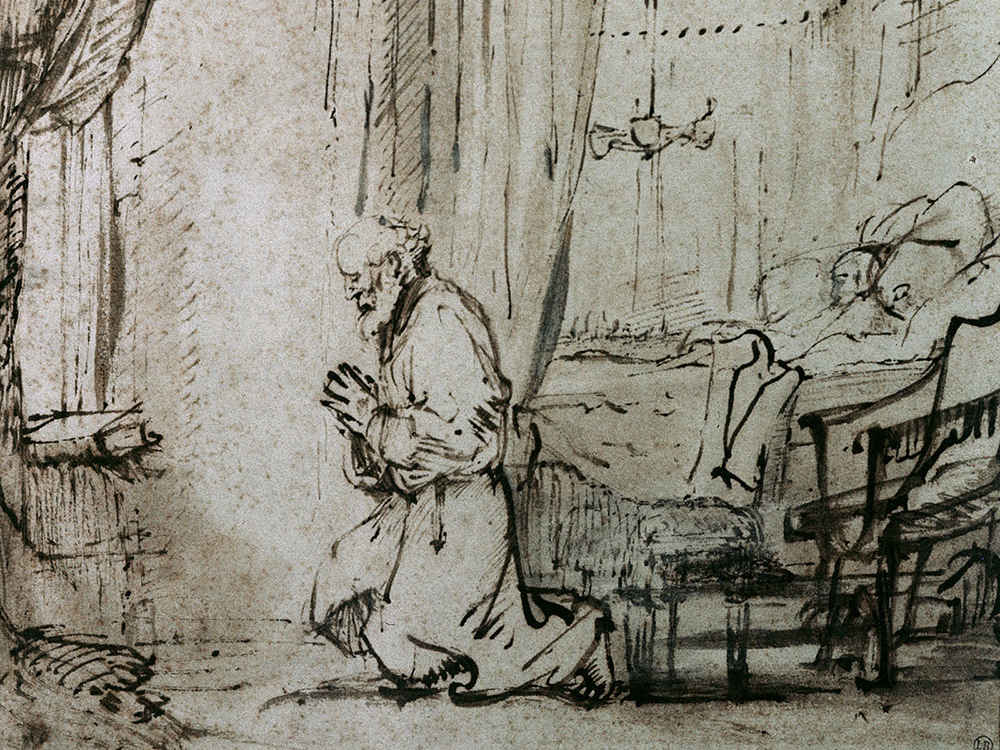 Fr. Matthew Brench over at St. Aelfric’s Customary has put together a wonderful resource for prayer. It’s just the sort of thing that I’ve been looking for. It’s an order of prayer, not to replace Morning and Evening Prayer or the Great Litany, but something extra for us to use in our homes in this time. You can find it here: Prayers in Time of Infectious Disease. “Five groups of prayers (most of which are collects, but let’s not get hung up on nit-picks) are appointed: Preparatory Prayers = more generic prayers to set the tone and capture the spirit of the times For those who are vulnerable, at risk, or sick = specific petitions for various demographics and groups, ultimately praying for the suffering and the needy For those who are responsible for others = specific petitions for those who care for the sick, for the infrastructure and leadership, and even the media, all of whom play they parts for good or for ill during a crisis For peace of mind = these...

Find us On Social Media

“Light and strength for the domestic church.” An Anglican resource for liturgical living.